Glossy, eyes like diamonds, skin like  living alabaster, chiselled cheekbones and with a somewhat sophisticated demeanour, Angelina Jolie is considered to be bizarrely beautiful when compared with her fellow Hollywood contemporaries. For unlike younger stars such as Jennifer Lawrence or Kristen Stewart, Ms Jolie’s looks are dark, exotic, and elegantly mature. Nothing is refined as her acting talent though. Glimpses of her extraordinary abilities can be seen in movies such as A Mighty Heart, Girl Interrupted and Changeling (the latter two for which she was nominated for an Oscar). 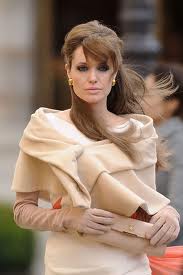 Yet beneath the glitz and glamour, Ms Jolie represents the image of celebrity at its most humanising and aware. When she was in her mid 20s and on the set of her 2000 film Tomb Raider,  Ms Jolie was filming in Cambodia, one of the poorer countries in Asia where one in eight children dies over the age of five and over 50% of its youth suffer malnutrition. It was here that she developed an understanding of the extreme poverty present in a war torn country, where both genocide and hunger are rampant. 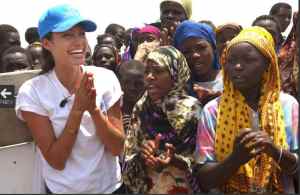 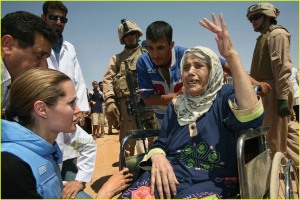 Speaking on here experiences: ‘We have so much and we want for other things, but we don’t realise how grateful we should be for other things…..suddenly you see these people, who are really fighting something, who really surviving and who have so much pain and loss… and you feel like your whole life you have been so sheltered and so spoilt with so much and you’re suddenly so grateful.’

It is these concerns that Ms Jolie has tried to translate to western cultures. Indeed she herself gave a third of her income to refugees and charities. Later that year Ms Jolie contacted the United Nations High Commissioner for refugees. Additionally she began visiting refugee camps all across the word in the form of field missions with UNHCR.

Beautiful inside and out: Angelina almost reduced to tears when speaking about the suffering of others.

Together they have carried out over 40 field missions across the world to areas where poverty is widespread, where hunger is prevalent and where human
loss is commonplace. Through these activities and advocacy for poverty, she was named a UNHCR Goodwill Ambassador in 2001, at just 26. Her consistent humanitarianism spanned more than 11 years and hence in 2012, the present high commissioner Mr A.Guterres appointed her as his special envoy.

Lastly, the Hollywood beauty has been  honoured for her humanitarian work at the Academy of Motion Picture Arts and Sciences’ annual Governors Awards in November 2013. Excerpts from the event may be included in the 2014 Oscar telecast, to be hosted by Ellen DeGeneres on 2 March. 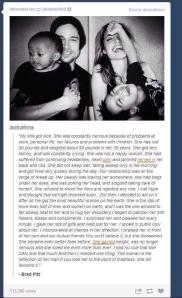 On top of these multiple adoptions, Ms Jolie herself has had three biological children with Mr Pitt. These include a daughter, Shiloh Nouvel (born May 27, 2006), a son, Knox Léon and another daughter, Vivienne Marcheline (both born July 12, 2008). 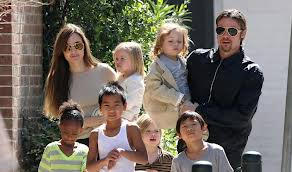 “The center of my life is my kids,” Jolie told the Los Angeles Times. “I woke up at 3 in the morning with four kids with jet lag and two babies. I put myself together for a few hours and go out. And then I go home. This is my job.”

It is for these reasons that Ms Jolie restores humanity and awareness to the tacky and defiled word ‘celebrity’. Her attempts at utilising her own fame to advocate issues that are generally under-recognised in the western world, represents a genuine attempt to overcome such overwhelming ignorance. Her success as spokeswoman, wife, mother, humanitarian, actress and living goddess of the silver screen, shows a woman at the heights of her prime and should no doubt serve as a role model that the young should ceaselessly hope to emulate.